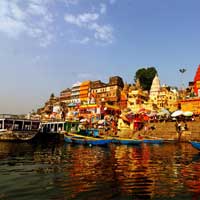 A visit to the mesmerizing city of Varanasi is tantamount to visiting peace and spirituality within. Also known as Kashi and Benaras, Varanasi is not only the holy city but also one of the Shakti Peethas and one of the twelve Jyotir Linga sites in India. Its rich cultural heritage is beyond words. Located ideally on the banks of the holy river Ganga, this city is said to be the abode of Lord Shiva. It has been the seat of learning since ancient times. It is dotted with numerous temples and ghats where visitors come from all over the world in search of spiritual learning and attainment of moksha. It is the oldest city in the world and a famous pilgrimage site of the Hindus. Mark Twain, the world renowned American author, described Varanasi as “Older than history, older than tradition, older even than legend, and looks twice as old as all of them put together”.

Temples
The sacred city is dotted with around 23,000 temples but the temples which are most famous are:

Kashi Vishwanath Temple
Dedicated to Lord Shiva, this temples is one of the 12 Jyotirlinga Shiva temples in the city. It is the most visited temple.


Durga Temple
Dedicated to Goddess Durga, embodiment of shakti or female power, this temple is also known as the money temple as there are many moneys residing on the huge trees nearby. The temple has multi-tiered spires and is stained red with ochre, representing the red colour of Durga.

Sankat Mochan Hanuman Temple
Built by the founder of the famous Banaras Hindu University, Pandit Madan Mohan Malviya, this temple is dedicated to Lord Hanuman. The legend goes that the temple was constructed on the spot where the great Hindu saint Tulsidas has a vision of Hanuman.

Tulsi Manas Temple
Built in honour of Lord Rama, this temple is located where the great Hindu saint is believed to have lived and written the great epic “Shri Ramcharitmanas”.

Varanasi Ghats
There are more than hundred ghats in Varanasi where pilgrims bathe for spiritual purification. If you visit the ghats early morning you can catch glimpses of priests, sadhus offering puja and people practicing yoga and meditation. Also you can take a boat ride at dawn for lovely views. Assi Ghat, Darbhanga Ghat, Dasaswamedh Ghat, Man Mandir Ghat, Scindhia Ghat are a few famous ones.


Banaras Hindu University
It is one of the most renowned universities of India established in 1917. Sprawling across 5 sq km, the university offers a wide variety of courses to students. It also houses the Bharat Kala Bhavan where beautiful miniature paintings, old photographs of Varanasi and brocade textiles and sculptures from first to fifteenth centuries are on display.

Sarnath
Located only 10 km from Varanasi is Sarnath which is the place where Lord Buddha preached his message of the ‘middle way’ to nirvana. There are several Buddhist structures in Sarnath.

Khushinagar
It is the historic place where Lord Buddha attained parinirvana (nirvana-after-death, which occurs upon the death of the body of someone who has attained nirvana during their lifetime).

How to Reach
Varanasi is well connected by air, rail and road from all the major cities of India. Varanasi is around 816 km from Delhi.