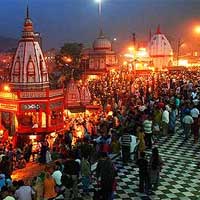 Located in Uttrakhand, Haridwar is a highly revered pilgrimage center of the Hindus. Pilgrims and tourists come here from far and wide to take a dip in the holy river Ganga. It is here the sacred river Ganga enters the plains for the first time after flowing through the mountains. It is an ancient city with rich cultural heritage. Also known as the Gateway to the Gods, Haridwar is also the place where the grand Kumbh Mela (the largest religious gathering in the world) is held at an interval of four, six and twelve years. The legend goes that Haridwar is one of the four places (apart from Ujjain, Prayag and Nashik) where the drops of amrit (the elixir of immortality) accidently spilled over from the picture when it was being carried by the celestial bird Garuda.


Maya Devi Temple
One of the Siddhi peethas of the country, this temple is dedicated to Maya Devi. It is the place where the heart and navel of the goddess Sati had fallen.

Mansa Devi Temple
Dedicated to goddess Mansa Devi (literally meaning the goddess who fulfills desires), the temple is set at the top of Bilwa Parwat where pilgrims visit through rope-way cable car.

Sapt Rishi Ashram and Sapt Sarovar
It is the place where the holy river Ganga split herself into seven currents so that the seven sages who meditating here don’t get disturbed.

Rishikesh and its attractions

A holy city located on the banks of river Ganga and at the foothills of the Himalayas, Rishikesh is only 25 km from Haridwar. It is the gateway to the four famous Hindu pilgrimages namely Char Dham- Gangotri, Yamnotri, Kedarnath and Badrinath. It is popularly known as the yoga capital of the world as some of the finest yoga and meditation ashrams are located here. People come here from across the globe to learn yoga and meditation to find inner peace and happiness. According to the legend it is at this place Lord Rama did penance for killing Ravana. There are several temples, ashrams and spa resorts in Rishikesh.


Lakshman Jhula, a hanging bridge, is a major landmark of Rishikesh. It is believed to be the place where Lord Rama’s brother Lakshman crossed the river using a jute rope. Triveni Ghat is a well known ghat in Rishikesh and pilgrims come here to take a holy dip and attend Ganga Aarti.
Rishikesh is also a perfect place for adventure lovers as one can enjoy adventure activities like white water rafting, canoeing, trekking, rock-climbing, mountaineering and camping.

How to reach
The nearest domestic airport is Jolly Grant Airport in Dehradun (35 km from Haridwar). It is also well connected by rail and road with the major cities of the country.