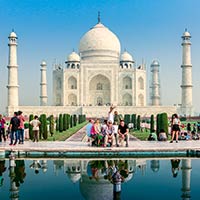 The fascinating attractions of Uttar Pradesh make it a sparkling gem of India tourism. From rich cultural heritage to wildlife, lakes, mountains, monuments, architecture, religious fervor, adventure, lip-smacking cuisine, this state has a lot to offer to make your holidays extraordinary! Lucknow, the capital city of Uttar Pradesh, is itself a major attraction.

Agra
Agra is a historic city of Uttar Pradesh which takes immense pride in being the home of Taj Mahal, one of the Seven Wonders of the World and a World Heritage Site. Taj Mahal is the most famous attraction of India. It is a mausoleum built by the Mughal Emperor Shah Jahan in memory of his beloved wife Mumtaz Mahal. Its breathtaking architectural beauty attracts tourists from across the globe. Agra Fort and Fatehpur Sikri are the other must-visit attractions of Agra.


Lucknow
This wonderful city aptly called the ‘City of Nawabs’ as several nawabs ruled it and contributed to its rich cultural heritage. It boasts of architectural beauty, historic shrines, delicious food, rich culture and beautiful handicrafts.

Varanasi
Varanasi is the oldest city in the world known for its religious significance. Also known as Banaras, this sacred city is located on the banks of River Ganga and is dotted with many religious ghats and temples where people come from far and wide.

Mathura and Vrindavan
Synonymous with Lord Krishna, Mathura-Vrindavan are the pilgrimage centers associated with the life of Lord Krishna. According to the legends Lord Krishna was born in Mathura and he spent his childhood in Vrindavan. There are around 5000 temples in Vrindavan. Banke Bihari Temple is the most famous temple of this place.

Sarnath
It is the holy place where Lord Buddha delivered his first sermon after attaining enlightenment.


Allahabad
It is a culturally rich city of Uttar Pradesh where the famous Kumbh Mela (the largest religious gathering in the world) is held every twelve years attracting lakhs of devotees.

Wildlife
Uttar Pradesh boasts of a wide range of flora and fauna. Its rich bio-diversity makes it a home to several wildlife sanctuaries and national parks.

How to reach
Uttar Pradesh is well connected to the major cities of India by air, rail and road.