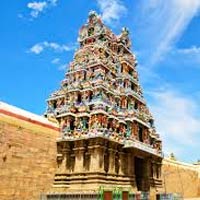 Located on the banks of river Vaigai, Madurai is the third largest city in Tamil Nadu. Known majorly as the cultural headquarters in southern India, it has been a major settlement for more two eras and is also one of the oldest inhabited cities in the world. Being one of South India’s marvellous Hindu pilgrim destinations, no wonder it is renowned worldwide for its temples built during the ancient dynasties of the Pandyas and Cholas mostly in the Dravidian style of architecture.

Some major attractions of Madurai

Meenakshi Amman Temple
Located on the south side of the Vaigai River and being one of the most historical and biggest temples in India, it is famous for its thousand-pillared hall widely regarded as an architectural and engineering marvel. It houses around 33,000 sculptures and was even nominated in the list of top 30 in the “New Seven Wonders of the World”. The temple is dedicated to Goddess Meenakshi (one of Parvati’s forms) and her consort, Lord Shiva-Sundareshwarar. The entire temple compound has 14 gopurams (entrance towers) ranging from 45–50 metres in height along with two golden sculptured vimana (shrines) over the altar of the main deities. It is known to attract over 15,000 visitors a single day which increases to around 25,000 on Fridays.


Koodal Azhagar Temple
It is famous Vishnu temple located on the foothills of Solaimalai. It houses the Navagraha (nine planet deities) idols which are otherwise found only in Shiva temples.The prime deity, Azhagar, is believed to be the brother of Goddess Meenakshi from the Meenakshi Temple. Also, one of the other six abodes of the Hindu god Murugan known as Pazhamudircholai is located at the top of the Solaimalai hill.

Thiruparankundaram
Located on a hill around 8 km away from Madurai, it is the site where the Hindu god Murugan is said to have married Deivanai. Also famous for being the first among the Six Abodes of Lord Murugan, it is the second most visited tourist spot next to the Meenakshi Amman Temple.

Kazimar Big Mosque
It is the first and the oldest Muslim place of worship in the city. Moreover, the famous Madurai Maqbara (Dargah of Shadhili Sufi saints Meer Ahmed Ibrahim, Meer Amjad Ibrahim, Syed Abdus Salaam Ibrahim) is located inside this mosque.


St. Mary’s Cathedral
It is the seat of the Roman Catholic Archdiocese of Madurai.

How to Reach
Madurai is well connected by air through Madurai International Airport and by rail via Madurai Junction.