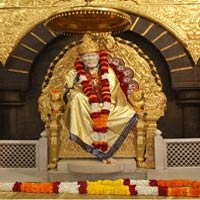 Shirdi is one of the most revered pilgrimages for Hindus. It’s a holy town located in the state of Maharashtra. Devotees come in large numbers to this place to seek blessings of Sai Baba. The town houses the famous Sai Baba Samadhi Mandir, the shrine Sai Baba who was a saint highly revered by both Hindus and Muslims. He came to the Shirdi village when he was sixteen and started living in the Khandoba Temple. And later he became the spiritual master. He used to go to the temple as well as the mosque and spread the message of brotherhood and helped people solve their problems. He taught people the lessons of love, forgiveness, charity, peace and devotion to spirituality.

Sai Baba could never see anybody in pain or problem. He would go out of his way to help them. It is believed that he had magical powers too and several miracles happened in the lives of his devotees. The Sai Baba temple in Shirdi was built by Shreemant Gopalrao, a Nagurpur based businessman who was also a devotee of Sai Baba.

Shri Gurusthan Mandir is the sacred place where Sai Baba was first seen by the people when he came there at the age of sixteen. It is believed that if one burns an incense with faith at this temple, one’s wish gets fulfilled.

Lendi Baug is lovely garden where Sai Baba used to go everyday to water plants. The garden houses the tree under which Sai used to rest, a pit where he used to lit a Deepak (lamp), Datta Mandir (Samadhi of Sai Baba’s horse and Baba’s shivdi (well).