Wilderness at its best! 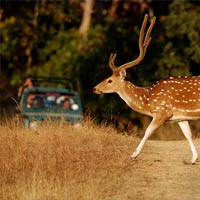 Located in the Seoni and Chhindwara districts of Madhya Pradesh, Pench National Park is a paradise for wildlife lovers. Named after the Pench River which meanders through it, the Park sprawls across around 758 sq km. It was an inspiration to the famous Rudyard Kipling for writing the world famous ‘The Jungle Book’. It was declared a wildlife sanctuary in 1983 and a Project Tiger Reserve in 1992. It boasts of the highest density of herbivores in India. You can explore the Park on an elephant safari or a jeep safari.