The Queen of Hill Stations 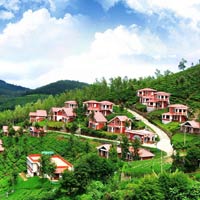 Standing at an elevation of around 7,347 feet above sea level in the Nilgiri Hills of Tamil Nadu, Ooty or Udhagamandalam is known as the Queen of Hill Stations. ‘Udhagamandalam’ is derived from the word "othakal-mund" which stands for “house in mountains”. It is a well-known tourist spot and is a traveller’s delight offering deep forests amidst picturesque lakes and lush green mountains along with sprawling tea gardens. It also served as the summer headquarters of the Madras Presidency during the British regime.

Some major attractions of Ooty

Annamalai Temple
Located about 20 km away from Ooty, it is famously dedicated to Lord Murugan and is known as seventh Hill Abode of the lord. Not only does it offer magnificent views, it also houses an observatory at the top of the hill for splendid panoramic views.


Fernhills Palace
It is a palace-turned-hotel of the Mysore Maharaja covering huge estates. The Palace provides exquisite views along with affordable snacks.

The Government Botanical Gardens
Laid out in 1847 and covering an area of around 22 hectares, thescenic gardens are maintained by the Horticulture department of the state. It houses over 650 species of plants and trees, including a fossil of a tree, which is believed to be more than 20 million years old. A paradise for nature lovers, it is also famous for the annual summer festival where flower shows and various cultural programs are held.

Ooty Rose Gardens
It is famous for the variety of roses which are believed to bloom only for 2-3 months a year.

The Tea Factory
Home to several tree gardens and factories, it is known for its special Nilgiri tea and breath-taking views.

Ooty Lake
Covering an area of around 65 acres, it also houses the Boat offering boating facilities to tourists. The picturesque lake is set among Eucalyptus groves with a railway line running along one bank.


Wax World (Wax Museum)
Housed in a 142-year-old bungalow, it is a wax museum that is home to life-like wax statues of personalities of Indian history, culture and heritage.

Doddabetta Peak
Situated at an altitude of around 2,623 meters, it is the highest point near Ooty. It is known for its breath-taking views of the valley and on clear days, one can even catch a glimpse of Coimbatore plains and the flat highlands of Mysore.

How to Reach
Ooty is well connected by air through Coimbatore International Airport and by rail via Udhagamandalam railway station to the major cities of the country.