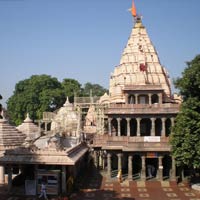 One of the seven sacred places to attain Moksha, Ujjain is situated on the bank of Kshipra River, in Madhya Pradesh. Millions of pilgrims take a holy dip during Kumbh Mela which takes place here once in every 12 years. Kumbh Mela is the largest religious gathering in the world. Also known as ‘temple town’ Ujjain is famous for its connection with Hindu mythology. Ujjain is a place to many monasteries too.

Mahakaleshwar temple
Dedicated to lord Shiva, Mahakaleshwar or the Mahakal shrine is one of the 12 Jyotirlingas. The temple is built in five levels including an underground level. The walls are adorned with inscriptions and sculptures. The roof of the shrine has decorations with over 100 kg silver. Believed to have formed on its own, the jyotirlinga is considered to be the only jyotirlinga facing south. The holy sacred place is a must see in Ujjain.

Bhartrihari caves
Situated just above the bank of River Shipra near Gadhkalika Temple the Bhartrihari cave is named after the step brother of Raja Vikramaditya, who was supposed to meditate in the cave. Hence, got the name of Bhartrihari. Many sculptures are visible on the walls of caves defining many things about the ancient time.

Kaliadeh palace
The majestic palace is famous for its Persian architecture inscriptions. The palace is said to be build on sun temple as few scatterings of the temple is still around. The palace is well known for its representation of the glorious history of the city.


Shopping in Ujjain
Explore the local bazaar in Ujjain for the exotic handicrafts, stone crafts, and ethnic jewelry wear to dress materials.

How to reach
Nearest airport for Ujjain is Indore (57 km) where flights to only few cities are available. It is well connected to many cities via rail and roads too.