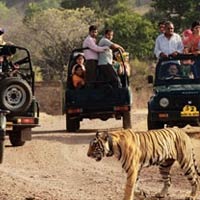 One of the famous wildlife destinations of India, Kanha National Park is famous for its tigers. Located in the state of Madhya Pradesh, the Park is a Tiger Reserve. Covering an area of 1,940 sq km, it is rich in bio-diversity. It boasts of more than 200 tigers and leopards. Its topography consists of sal and bamboo forest, hills, grassland, grassy meadows and meandering rivers. It became the national park in 1955 and was declared the Tiger Reserve in 1974, under Project Tiger. The natural beauty, greenery and wilderness of the Park served as an inspiration to Rudyard Kipling for his famous novel Jungle Book.

The best option to explore Kanha National Park is jeep safari. Venture into the deep forest and catch glimpses of enchanting wildlife. You can also choose to go on an elephant safari to add some more adventure to your wildlife tour in the park.

How to reach
The nearest airport is Jabalpur airport (around 175 km from Kanha). It offers regular flights to the major cities like Delhi and Mumbai. Jabalpur railway station is the nearest railway station. It is also well connected by road to the main cities of the country.