The home to Royal Bengal Tigers 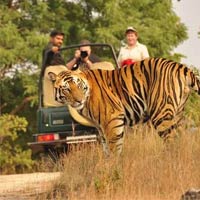 Sprawling across acres of land at the Vindhya Hills in Madhya Pradesh, Bandhavgarh National Park is an abode of the Royal Bengal tigers. Wildlife enthusiasts come to this Tiger Reserve from far and wide as the density of the tiger population at the Park is highest in India. Its geography consists of steep ridges, open meadows, forested valleys, rocky hill ranges and grassy swamps.

The Park is also a home to white tigers apart from a wide variety of other animals. It was once the hunting ground of the maharaja of Rewa. It was declared a national park in 1968. Go on an elephant safari or a jeep safari inside the park and catch glimpses of the enchanting wildlife. The park has several cave shrines with Brahmi inscriptions dating back to the 1st century. The park is divided into three zones namely Tala, Bamera and Magdi. Tala region is more famous for its tiger sightings. You can enjoy elephant shows organised in Magdi zone.


Flora
The park encompasses moist deciduous forests and is majorly dotted with sal trees. However, as you move towards the higher altitude you will find mixed forest consisting of saja, saj etc. The park also has long stretches of bamboo and grassland.

Bandhavgarh Fort
Located inside the park premises, Bandhavgarh Fort is more than 2,000 year old. It was built on Bandhavgarh hill by the maharaja of Rewa. Here you can spot the endangered species of vulture.

The best time to visit the park is from February to June. It remains closed from July to mid October.