An Enchanting Archipelago of Islands! 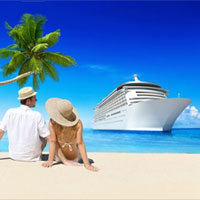 Ever wondered how the marine life looks like? Well, if you wish to experience it, there is no other better place than Lakshadweep for it. Holidaymakers can plan a visit to Lakshadweep Islands to enjoy an escape to the unspoiled charm of nature. The Lakshadweep islands are widely known as a popular beach destination in India adorned with crystal clear blue waters along with coral reefs. The islands are famous for pearl fishing. It also serves as a major supplier of sea food. A group of 21 islands from Lakshadweep and the adjoining waters also serve as a part of the Gulf of Mannar Marine National Park. A visit to the Lakshadweep islands is best to be planned for its pristine beaches, distinctive culture and marine life.

While being here, you can explore the following popular sites.

Kadmat
It is also called as Cardamom Island. Lying on a coral reef, it houses shallow shores with abundance of marine life. The huge lagoon lying towards the west of the island adds popularity to the destination.


Kavaratti Island
It is known as the most developed island in Lakshadweep which is the administrative capital as well. The island boasts of sandy white beaches with secluded lagoons and crystal blue waters. Tourists can enjoy swimming and water sports here.

Kalpeni Island
It is another secluded island that is popular for its wonderful beaches. Travellers can sunbathe as well as swim here. Snorkeling and scuba diving can also be enjoyed here. Waters with white sandy shores make it an ideal destination to explore with friends.

Bangaram Atoll
Besides boasting of its coral reefs, Bangaram is among the most visited islands here. It is the only island where liquor consumption is permitted. Lying close of the Agatti aerodrome, it boasts of clean and tranquil beaches.


Agatti Island
This island is not easily accessible and requires seeking special permit from the administration. The island has a majority of Muslim population. It is said to have been visited by Ibn Batuta, who was an Arabian traveler.

Minicoy Island
It lies at the southernmost point and often referred to as Malikau by the locals. The island used to be the ancient capital of Lakshadweep which was later named as Malikau by the Arabian Traders. The place speaks volume of its spectacular beaches. It is also popular for its culture and cuisine having Maldives influence on it.